Showa Denko (SDK) (TOKYO: 4004) has completed the expansion of used-plastic gasification facility at the Kawasaki Plant, and held a ceremony for the completion today.

As part of its basic chemicals business, SDK is producing ammonia at Kawasaki. SDK processes used plastic to obtain part of hydrogen necessary for the synthesis of ammonia. As an industrial material, ammonia is used in the production of synthetic fibers and metal surface treatment for automotive and construction machinery parts. The demand for ammonia used for removing nitrogen oxides contained in exhaust gas from thermal electric power plants and other facilities has been increasing in recent years. Furthermore, SDK’s liquefied ammonia (trade name: EcoannTM) has been approved and rated high as “eco-friendly goods for procurement” by major electric power companies because the product is partly based on used plastic.

In January 2015, SDK’s plan to raise the percentage of feedstock from used plastic was recognized by the Ministry of Economy, Trade and Industry as eligible for the ministry’s interest subsidy program for the promotion of effective utilization of resources. Under the program, SDK received a loan from the Development Bank of Japan Inc., and invested in the expansion of used-plastic gasification facility at the Kawasaki Plant*. After the expansion, the percentage of hydrogen from used plastic to produce EcoannTM will increase to 65%.

The method to produce hydrogen from used plastic entails significantly lower environmental burden compared to the conventional methods to produce hydrogen from petroleum-derived raw materials. By providing products indispensable for protecting the environment and improving social infrastructure, SDK will continue meeting the expectations of society and local communities. 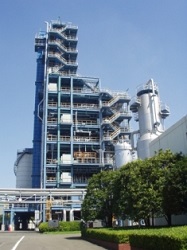 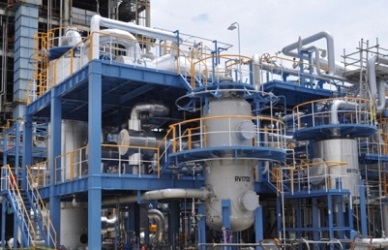 Expanded portion of the gasification facility