Showa Denko (SDK) (Tokyo: 4004), Showa Aluminum Can Corporation (SAC), which is a consolidated subsidiary of SDK, and Carabao Group Public Company Limited (CBG), a leading beverage maker headquartered in Bangkok, Thailand, have agreed to establish a joint corporation to manufacture and sell aluminum cans, and had a signing ceremony yesterday.

CBG is a beverage maker which has the second largest share in the energy drink market of Thailand. CBG promotes global marketing of its energy drink by pursuing effective brand-image strategy, which includes a partnership agreement with Chelsea Football Club, a member of the Premier League of the United Kingdom, effective from 2016/17 season. As a result, CBG has been successfully increasing the sales of Carabao energy drink in the Southeast Asian countries and the United Kingdom. CBG uses aluminum cans as containers for their export products. Therefore, in order to expand its overseas business further, CBG aims not only to expand its capacity to fill its products but also to establish a system that ensures a stable supply of high-quality aluminum cans.

In May 2014, SAC acquired a majority of shares in Hanacans Joint Stock Company (Hanacans), which is headquartered in the suburbs of Hanoi, northern Vietnam. In February 2017, SAC decided to establish Hanacans’ second factory to produce aluminum cans in the suburbs of Da Nang city, mid Vietnam. As a result of introductions of SAC’s production technologies and quality control system into Hanacans, the products of Hanacans are acclaimed by customers, and the company has been favorably increasing its sales in Vietnam.

SDK aims to expand its overseas business operation, centering on Asia, and has investigated the feasibility of its entrance into another emerging country’s market after its entrance into the Vietnamese market. CBG is expected to continue expanding its business because it already has majority shares in the markets of many emerging countries including Cambodia, where increases in population and improvement in standards of living are expected. Thus SDK and SAC decided to establish the joint corporation with CBG. 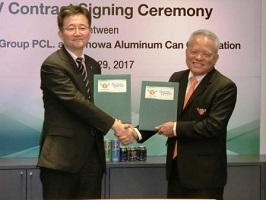 （left to right）Yasushi Tashiro,
President of SAC Mr. Sathien Setthasit ,
Chairman of CBG
In its ongoing consolidated medium-term business plan “Project 2020+,” the Showa Denko Group sets expansion of its overseas business as a key target. The Group classifies its aluminum can business into “Growth-accelerating” businesses in which the Group pursues expansion of businesses by preempting market growth. We strongly believe that the establishment of this new joint corporation will help us achieve the key target.