Showa Denko (SDK) (TOKYO: 4004), its Group companies, and their cooperative companies continued to perform aluminum can recycling activity in fiscal 2017 (April 2017 – March 2018), collecting approximately 4.81 million cans: equivalent to about 76 tons of aluminum when converted at the rate of 15.7 grams of aluminum per can.

Showa Aluminum Can Corporation, a consolidated subsidiary of SDK, started its aluminum can recycling activity in 1972. The activity spread across the Showa Denko Group in 2001, continuing until today. Employees of the Group companies and cooperative companies collect used aluminum cans from their households, workplaces, etc., and report the number of cans they collect. In SDK, we have in-house program to educate employees about aluminum can recycling and officially commend workplaces and individual employees in accordance with employees’ participation rate or volume of collected cans, aiming to vitalize the recycling activity. In fiscal 2017, a total of 7,875 employees, or 97.7% of all Group employees in Japan, participated in the activity.

Collected aluminum cans are purchased by the Group, and used mainly by Showa Aluminum Can Corporation to produce aluminum cans to contain beverages. Recycling of aluminum cans not only contributes to the promotion of efficient use of resources, but also reduces electricity consumed to produce aluminum by 97%, compared to the process in which we produce aluminum from bauxite ore. The Group donates the money resulting from the recycling activity to regional councils of social welfare, welfare facilities, and volunteer groups that aid people with special needs. Thus, this activity has been firmly established as a social action of the Showa Denko Group. 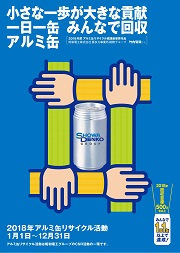 Poster for the aluminum can
recycling campaign in FY2018

The Showa Denko Group always manages its operations based on the principles of corporate social responsibility, aiming to achieve missions as a social contribution company. In addition to the aluminum can recycling, the Group has been promoting business activities which contribute to conservation of natural resources and energy, including production of ammonia utilizing used plastics as raw material and development of SiC epitaxial wafers for power devices. The Showa Denko Group will continue contributing to creation of society where affluence and sustainability are harmonized.