Showa Aluminum Can Corporation (SAC), a consolidated subsidiary of Showa Denko (SDK) (Tokyo: 4004), headquartered in Shinagawa Ward, Tokyo, has decided to establish its third base in Vietnam to produce aluminum cans, aiming to expand its business in that country. This new production base is to be located in Ba Ria-Vung Tau Province*, which is in the southern part of Vietnam. In addition, SAC has also decided to expand the capacity of can end production lines in the existing factory located in the northern part of Vietnam.

Hanacans Joint Stock Company (Hanacans), an affiliated company of SAC incorporated in Vietnam, has lines to produce can bodies and can ends in its Bac Ninh Factory located in the northern part of Vietnam, and lines to produce can bodies in its Quang Nam Factory located in the central part of Vietnam. This time, SAC decided to establish a new factory, which is to have capacity to produce 1.3 billion can bodies per year, in the southern part of Vietnam, and install an additional line to produce can ends with production capacity of 1.1 billion can ends per year in Hanacans’ Bac Ninh Factory. As a result of these measures, Hanacans will have three factories to cover everywhere in Vietnam, and have capacities to produce 3.1 billion can bodies and 3.3 billion can ends per year in total. The total amount of investment in the construction of the new factory and additional can-end production line is expected to be about 7 billion. The new facilities are scheduled to start production in July 2020. 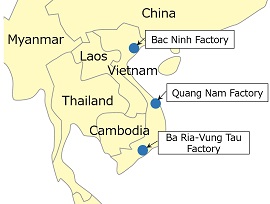