Showa Denko (SDK) (TOKYO: 4004) has received an award from Chairman of the Japan Business Federation for its used-plastic chemical recycling business. This award is part of Fujisankei Communications Group’s 29th Grand Prize for the Global Environment Award, and recognizes contributions by the business toward reducing environmental burdens through low-carbon conversion to raw materials for chemicals and resource recycling.

A presentation ceremony will be held on April 8 at Meiji Kinenkan in Tokyo with the presence of Their Imperial Highnesses Crown Prince and Crown Princess Akishino.

SDK has been conducting the used-plastic chemical recycling business since 2003. At its Kawasaki Plant, used plastic collected from home is gasified by thermal decomposition to generate hydrogen and carbon monoxide. Carbon monoxide from this process is used for production of carbon-based chemical products. Hydrogen is used as raw material for ammonia production, in fuel-cell vehicles, and for power generation at hotels using fuel cells. Thus, this business is contributing toward promotion of a low-carbon society.

While reducing CO2 emissions by avoiding incineration of used plastic, the business promotes resource recycling on land and reduces marine pollution by plastic. 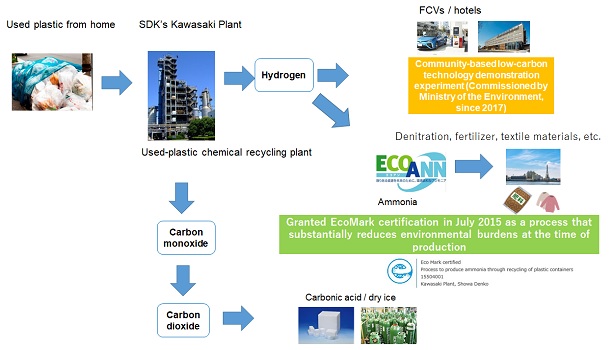 In addition to this chemical recycling, the Showa Denko Group is conducting various environment-friendly businesses. They include the global supply of graphite electrodes for recycling of iron, and production of aluminum cans based on used aluminum cans (can-to-can recycling). The Group was the first company in Japan to start an aluminum can recycling project. The Group will continue providing products, technologies, and services for settling social issues, thereby contributing toward reducing global environmental burdens.

Note: The Grand Prize for the Global Environment Award was established in 1992 by Fujisankei Communications Group with special cooperation from World Wide Fund for Nature (WWF) Japan. The award aims at encouraging the development of new technologies and products that will prevent global warming and promote a recycling-oriented society. It also aims at promoting environmental protection measures and enhancing global environment awareness. The award is granted to corporations recognized as having accomplished distinguished achievements in these areas.