Showa Aluminum Can Has a Ceremony to Celebrate the Completion of the Third Production Base in Vietnam
-Hanacans now has capacity to produce 3.3 billion cans per year-

Showa Aluminum Can Corporation (SAC), a consolidated subsidiary of Showa Denko (SDK) (Tokyo: 4004), headquartered in Shinagawa Ward, Tokyo, had a ceremony on July 29 to celebrate the completion of its third base in Vietnam to produce aluminum cans. This new production base (Ba Ria-Vung Tau Factory) is in Ba Ria-Vung Tau Province, which is in the southern part of Vietnam.

Ba Ria-Vung Tau Factory is the third production base of Hanacans Joint Stock Company (Hanacans), which is a consolidated Vietnamese subsidiary of SAC, and has production lines with a capacity to produce 1.3 billion can bodies per year*. In addition to the construction of Ba Ria-Vung Tau Factory, Hanacans is now installing an additional line to produce can ends in its Bac Ninh Factory located in the suburb of Hanoi (Bac Ninh Province)*.

SAC acquired shares in Hanacans in May 2014, and continues to have Hanacans introduce SAC’s leading production technologies and quality control system since then. Hanacans has been successfully increasing the sales of aluminum cans in northern and central parts of Vietnam. As a result of the completion of Ba Ria-Vung Tau Factory, Hanacans has established an aluminum can production system with three production bases that covers northern, central, and southern parts of Vietnam. Now Hanacans has a capacity to produce 3.3 billion can bodies and 3.3 billion can ends per year.

*For detail, please refer to our news release announced on April 25, 2019, “Showa Aluminum Can to Establish Third Production Base in Vietnam and Expand Existing Can End Production Line.” 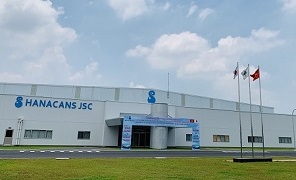 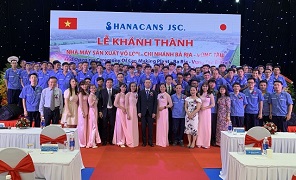 Ceremony for the completion of the factory