On July 1, 2020, Showa Denko (SDK) (TOKYO: 4004) obtained a license to process industrial waste, and started to accept used plastics which were crushed and molded.

Since 2003, SDK’s Kawasaki Plant, which is located in Kawasaki City, Kanagawa Prefecture, has been operating “plastic chemical recycling business,” a business to recycle used plastics as raw materials for chemicals under the provisions of Containers and Packaging Recycling Law. SDK calls this business “Kawasaki Plastic Recycling (KPR).” We gasify used plastics under high temperature, and decompose them to the level of molecules. Then gasified plastics are converted into hydrogen (low-carbon hydrogen) and carbon dioxide (CO2). We use low-carbon hydrogen as raw material to produce ammonia, and CO2 as raw material to produce dry ice and carbonated drinks.

SDK is the only company in the world that has track record of long-term commercial operation of plastic chemical recycling through gasification. These days, social needs for high-technology based recycling of used plastics as a countermeasure against plastic-debris problems including marine plastic problem have been increasing. SDK obtained the license to process industrial waste as a response to the increase in such social needs. In addition, this license enables SDK to diversify sources of used plastics. Thus, SDK has established a used-plastics procurement system that supports stable operation of KPR.

Kawasaki City is recognized as Eco-town*2 by the Ministry of Economy, Trade and Industry and the Ministry of the Environment. In July 2015, SDK and Kawasaki City concluded an agreement to cooperatively promote realization of society where low-carbon hydrogen with low environmental burden is utilized. SDK has been conducting demonstration experiments in which SDK supplies low-carbon hydrogen to fuel cells installed in a hotel located in Kawasaki City and a hydrogen station for fuel-cell vehicles. SDK conducts these demonstration experiments as “Demonstration Projects to Promote Local Consumption of Locally Produced Low-carbon Hydrogen Gas Made from Used Plastics” which has been commissioned by the Ministry of Environment. 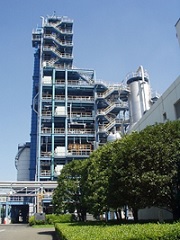 SDK has been promoting businesses that support resources-recycling oriented society, aiming to contribute to solution of issues related to SDGs. Through provision of various products and services, we will continue contributing to creation of society where affluence and sustainability are harmonized.