What prompted the development?

Indium tin oxide (ITO) films, which have high transparency and conductivity, have been widely used for electrodes for touch panels. However, films with multilayer structures of metal oxides such as ITO are too hard to bend. It has also been considered difficult to mount ITO films on touch panels larger than current ones while maintaining their transparency because of the manufacturing process. Therefore, manufacturers have been seeking a flexible material that can be used for larger displays and has higher transparency and conductivity as an alternative to ITO.

With the diversifying physical forms of interfaces, Showa Denko predicted that touch panels would require greater flexibility. To realize foldable smartphones that offer both portability as well as a large screen, or automobile displays that are curved, around 2016 we started developing transparent conducting films that remain conductive in the curved and bent portions.

What direction did you set for the development?

We had been developing conductive materials including silver nanowire for the general market since around 2012, but then at some point we shifted the direction of development. We narrowed down the development of materials to focus on markets where their advantages can be exploited. Through this strategy of selection and concentration, we finally chose a market where transparent conducting films can be used in curved and bent portions.

Alternatives to ITO include conductive high polymers and carbon nanotubes. After considering conductivity, cost, workability, the effects of coloring, and all other factors, we chose silver nanowire as an excellent material among the alternatives. 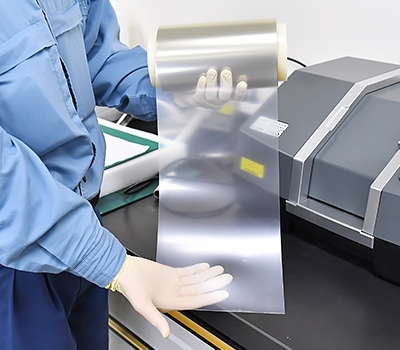 How did you carry out the development?

We knew that some other manufacturers had chosen the same material. To differentiate ourselves, we worked on adding value to the films such as bending durability by developing films with a novel layer structure.

When silver nanowire is simply applied to the base film, the silver nanowire aggregates and good conductivity is not obtained. To appropriately diversify silver nanowire, we had to develop a binder resin that prevents aggregation and an original ink including the resin. The normal research process involves finding the optimum one among a huge number of resins. But by using our knowledge of resins such as synthesis techniques and structural properties, we were able to quickly select an optimum resin and achieve the target effects.

We also made use of our products to develop an overcoat material that prevents the deterioration of conducting films as we developed the ink. We determined the optimum resin composition to make the film transparent after drying. Our innovations are embodied in the small details of the products, such as the methods of material selection and the process of attaching protective films to both sides for storage or transportation in the final stage.

We successfully selected our proven suitable materials and speedily completed the development. We succeeded by changing the development goal to suit the target market, and by leveraging our existing material research and techniques. 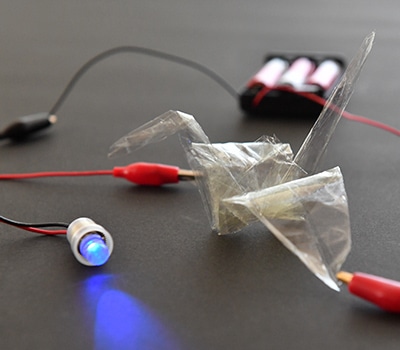 What was the most difficult part of the development?

I remember trying to choose a solvent for the ink. An appropriate solvent is important to ensure uniform drying of the developed ink while applying the ink to the base film and drying it. We had a lot of difficulties, such as subtle changes in the kind or ratio of the composition resulting in the deposition of undissolved components and noticeable colors in the stability tests. After several attempts to improve quality, we finally found a good composition.

Also, when we used a sheet for testing in the laboratory we found no problems, but when we used a roll and equipment for mass production, the ink did not dry at all. The environment affected the results more than expected. The team members and cooperating companies repeatedly discussed and examined the conditions and we managed to find the optimum conditions.

What are the advantages of the developed transparent conducting films using silver nanowire?

The outstanding feature of this product is its bendability. We have developed a roll type of foldable transparent conducting film and mass production technique, which are the decisive factors. In particular, the bendable type has a thickness of 13 μm, the thinnest ever.

We achieved this thickness by improving the films while responding to customers' requests. When customers ask for new applications and functions, we must improve the films by using our experience and knowledge.

What is the direction of future development?

In the next step, we will continue working on not only foldability but also three-dimensional molding. We aim to develop thinner and more workable films in future.

We will continue expanding their applications while analyzing various evaluation results, requests from customers, and market feedback. 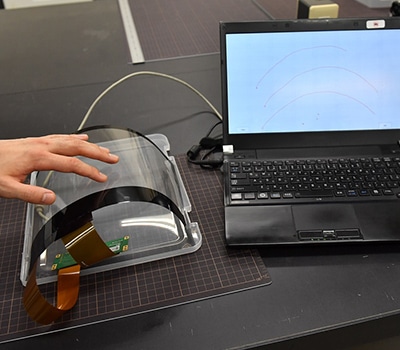