Laminate film cooler is a battery cooler that is developed by “SPALFTM” aluminum laminate film. SPALFTM has been used as packaging material of lithium-ion batteries (LIBs) for electric vehicles (EVs). By utilizing the advantages of aluminum foil and plastic film, we have developed a lightweight and thin battery cooler while ensuring the efficiency and safety required in onboard battery cooling systems.

What prompted the development?

I was originally involved in the development and sales of packaging materials for food products and LIBs at Showa Denko Packaging Co., Ltd., a Showa Denko group company. The company's core product, SPALFTM, which is a packaging material for LIBs, is an aluminum laminated film made by bonding aluminum foil and plastic film together. Thanks to its better molding flexibility compared with metal cans, and its lighter weight and excellent corrosion resistance, this product has been used as packaging material for pouch-type LIBs for more than 20 years. This bonding technology is one of our company’s proprietary technologies, and we were looking for ways to make use of this technology to develop next generation products.

Around this time, we started to hear about many battery cooling issues from our customers of the battery makers or automotive industries.

The optimum temperature range for LIBs to function properly is intrinsically very narrow between 5ºC and 27ºC (operating temperature range: 0ºC to 45ºC), and it is said that higher temperatures can cause batteries to deteriorate. The life of LIBs depends on temperature, and if multiple batteries are used, temperature distribution in each of these batteries also affects. For this reason, it is important to keep the batteries at a low temperature by cooling them, and we have considered to develop a solution to these issues using SPALFTM.

What direction did you set for the development?

Initially, we were looking at cooling smartphone and laptop computer batteries, but we focused on EV batteries in terms of commercialization. We concluded that marketability of the batteries would be greater in the area of EVs than in other areas, because the number of battery cells of EVs are much larger.

Batteries in EVs need to be charged and discharged at a high rate of speed. Fast charging and discharging creates more heat generation, so a means to dissipate this heat is indispensable. Since a single EV is equipped with hundreds or thousands of battery cells, a considerable amount of heat is generated. In addition, since the temperature distribution caused by each battery cells affect life and performance of the battery module, the temperature regulation of all battery cells to keep within an optimum range is required.

If we were to provide cooling for hundreds or thousands of battery cells using only the laminate film cooler, the amount of laminate film needed per EV would come to about 2-6 m2 wide. Since no standards currently exist for onboard battery cooler specifications, we can expect to see a considerable number of shipments if we can take initiative as the first to enter the market. 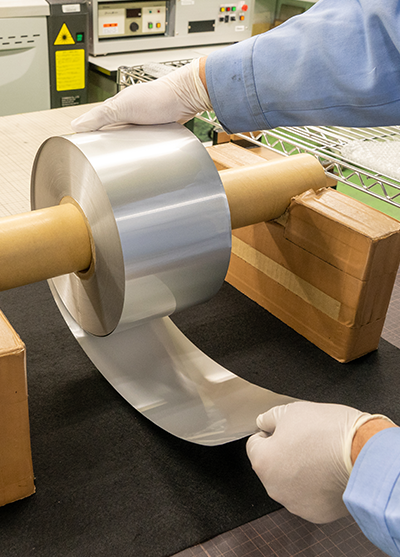 How did you carry out the development?

At first, we were not sure if SPALFTM would be a suitable material for battery coolers. So we enlisted the help of our heat exchanger development team to actually make samples.

SPALFTM consists of a structure in which aluminum foil is sandwiched between plastic films, which have low thermal conductivity, so there was concern that the thermal conductivity would be less than that of aluminum metal, which has a much higher. In other words, we were concerned that this might impair the product’s cooling efficiency, making it unsuitable as a cooling device.

However, estimations based on the actual structure and usage conditions showed that there were no considerable differences in temperature, as the low-thermal-conductivity plastic layers were thin and the batteries’ heat generation density was not so high. In addition, thanks to the plastic layers included in its constituent material, it offers higher corrosion resistance against water-based coolants, as well as electrical insulation. And thanks to their adhesive strength, we expected that it would provide more than enough resistance against internal pressure. So, we actually prototyped them and verified their characteristics in demonstrations.

And once we saw the potential of SPALFTM-based coolers, we were able to take our first step towards development. Then, we decided to take our development into the design stage for its internal structure to find out what kind of structure would make it effective as a cooling device.

What is a key to solve the problem?

We came up against many roadblocks as we proceeded with our development, particularly our biggest challenges were to identify the specific requirements for EVs and to determine the constituent material. While SPALFTM is already being used in onboard battery packaging, we came to a point where we needed new expertise on matters such as what the different performance requirements for onboard battery coolers were and what materials were most suited for different parts.

Fortunately, there were many ceramics and organic materials experts working at Showa Denko, and above all, the company had extensive expertise on thermal design technology that it had built up in the development of aluminum heat exchangers as well as a wealth of knowledge on the automotive industry. So we were able to work with other departments and make effective use of knowledge we had accumulated in-house to move our development forward.

We also made many new discoveries in our development process. We were able to overcome a variety of obstacles through trial and error, for example, when we found that the strength of one of the materials we used was greater than we expected, or when we learned that the quality of the water flow was being affected by the shape of the plastic parts.

In this way, as a result of bringing together the broad range of knowledge that Showa Denko was built on and through numerous trials and errors, we were ultimately able to prototype our laminate film cooler.

What are the advantages of the developed laminate film cooler?

The laminate film cooler is a water-cooled cooling system, and its envelope and inner fins are made of SPALFTM. Since its top layer is plastic, we were able to give it advantages that are not found in conventional coolers.

First of all, the plastic film lamination improves aluminum’s resistance to corrosion, and this meant that we were able to make the aluminum layer thinner. As a result, we were able to reduce the thickness of this part to between a fifth and a tenth compared to coolers made using only aluminum material, and we were also able to design it for press forming. Since less pressure drop occurs when the coolant is flowing—thanks to the outer walls and fin material being thin and having high adhesive strength—and also since they are sufficiently robust, we can expect to see cooling systems that are more lightweight and compact. And since it provides a higher flexibility in design in terms of shape, it can be used for battery systems with complicated battery cell arrangements, which means customers can make effective use of limited internal spaces.

Also, while brazing is typically used to join metal plates with fins, laminate coolers take advantage of the material’s thermal plasticity and are bonded by heat adhesion (heat sealing). While brazing requires heating within a narrow temperature range around 600ºC for aluminum and requires advanced skills and specialized equipment, in heat sealing, materials can be instantly bonded at 200ºC. So we believe that it offers great benefits for the manufacturing process as well. 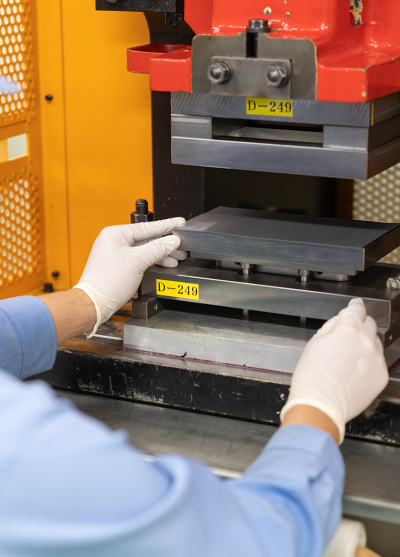 What will you develop in the future?

Our aim going forward is to make this product thinner and lighter. This is because we obviously intend to support the increasingly large capacities of batteries in EVs, but also because we believe that electrification will spread out into transport equipment in areas other than EVs.
One example would be the development of transport drones. In transport applications, these drones may have to fly for extended periods on occasion, and this means that they must have more batteries onboard.
Heat generation from the additional batteries obviously must be controlled, and given that “flying” is a key requirement of drones, the weight and thinness of the batteries’ coolers become critical.
As thin and light as laminate film cooler already is, we believe we can answer these needs by making it even thinner and lighter.

In the automotive area, we believe that one issue will concern how to assemble laminate film cooler in the process of actually mounting it onto vehicles.
Since EV batteries occupies very large area, we may have to consider making larger versions of the laminate film cooler to accommodate the size of EV batteries such that we can cover them using a single large piece of the product as opposed to combining a large number of smaller coolers.

Also in terms of materials, we believe we need to review and pursue possibilities for improving the product’s performance such as by substituting the plastics we currently use for engineering plastics which offer greater durability and heat resistance.

As we proceed with our development, we may come up against even greater roadblocks than we have in the past. When that happens, we are sure to overcome them by bringing together the knowledge of the many experts working at Showa Denko to commercialize a more evolved version of laminate film cooler and establish a firm presence in the LIB cooler market.